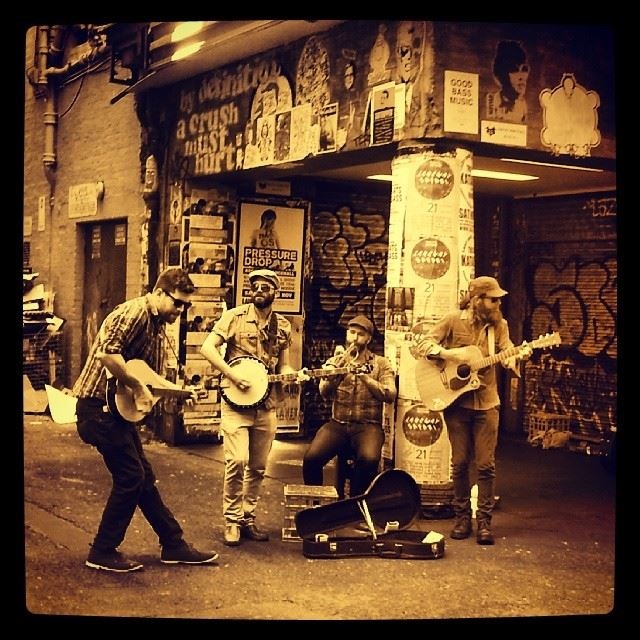 THE TIMBERS’ thumping rhythms and big misty mountain melodies will cast you away to a sweaty, smoky, melting-pot of folk, roots and Celtic bushman brassy punk. They rollick and hammer their way through live gigs with abundant energy and have become festival favourites throughout Australia. This Adelaide based band has an infectious desire to take their audience on a wild ride of non stop musical passion with no limits.

Their debut album, “Lawless” released in 2014 received Triple J airplay and became a favourite on community radio stations Australia-wide. Rhythms magazine wrote “Imagine contemporary folk-rock bands such as Mumford & Sons and Graveyard Train, somewhere in the Australian bush or on the high seas and you have an idea of what The Timbers are about”.

The versatility of the Timbers music has allowed them to share the stage and many festival line ups with acts such as John Butler Trio, Ball Park Music, Eskimo Joe, Xavier Rudd, Sasquatch, The Beards, Little May, and The Audreys.

2014 was a break through year for the Timbers seeing them play to large crowds at Caloundra Music Festival (Qld), Illawarra Folk Festival (NSW), and Gorgeous Festival (SA). The year was topped off by being invited to perform to a crowd of 40,000 people at Adelaide’s New Years Eve event.

The Timbers were the 2013 winners of the Emily Borrows award from APRA. This accolade entitled them to be added to the illustrious list of SA winners including The Hilltop Hoods and The Beards.

In December 2014 the timbers set up a recording studio in a church in the Adelaide Hills and began recording their second album. Only 7 months after the release of their first album “Lawless”. The band has taken their first eager steps in a bold project due for release in 2015.

Hailing from far away lands such as Mount Gambier, Tasmania, Ireland, and the Adelaide Hills, The Timbers have worked tirelessly together to create a unique high energy musical experience not purely confined to Alternative folk. With songs soaked in male vocal harmonies, awash with intricate banjo and mandolin licks, soaring trumpet lines, on a foundation of solid piano and all held together by pounding dance rhythms from foot percussion, there is surely something for everyone in The Timbers repertoire.