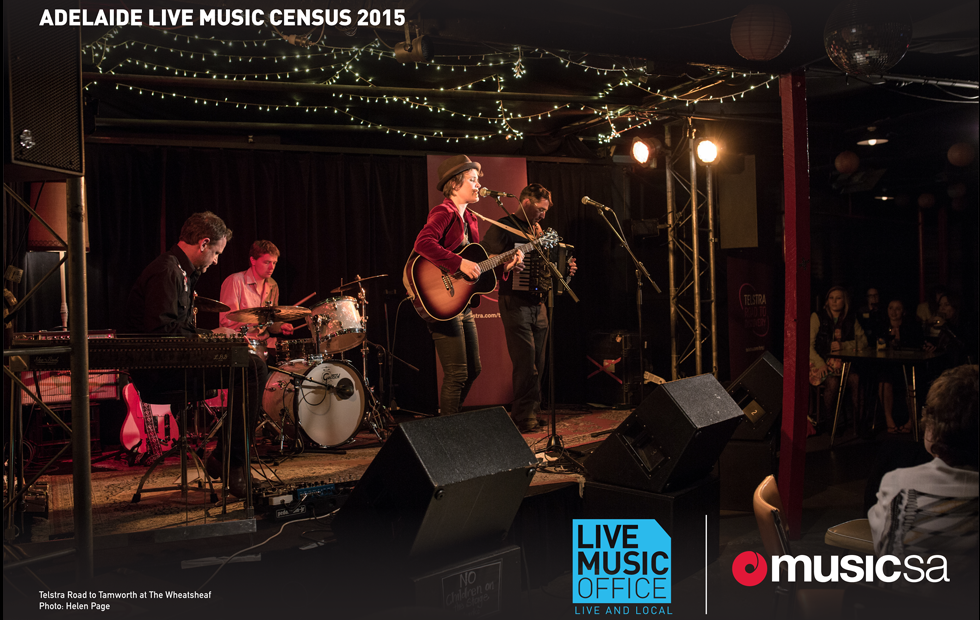 The Music Development Office has created a Google Map, illustrating the Adelaide Live Music Census as it covers the CBD & near surrounds – a fascinating visual depiction of our local live scene. 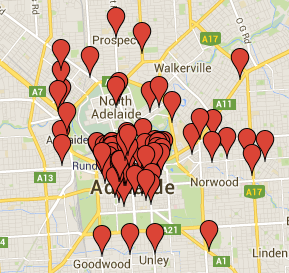 In response to the University of Tasmania’s report released this week identifying the live music industry as a significant contributor to national and state economies, Music SA and the Live Music Office today release the Adelaide Live Music Census, which offers a snapshot of live music activity in May 2015.

“Findings show that 962 gigs were presented during May 2015 in Adelaide and outer suburbs across 157 venues, with Adelaide city providing the bulk of live music offerings.” said Music SA General Manager Lisa Bishop.

This information comes in the wake of Arts Minister Jack Snelling announcing yesterday that in 2014, the live music scene contributed $263.7 million to South Australia’s economy, while nationally the industry brought approximately $15.7 billion to the economy and an estimated 65,000 full and part-time jobs.

During May 2015 hotels were the most significant venue type, providing 769 gigs across 108 venues, which totals 80% of gigs in Adelaide and 69% of venues.

“It’s pleasing to note that there are venues showcasing original contemporary music, which made up 35% of the gigs during May.” says Lisa Bishop “The diversity in venues offers a richer audience experience that allows venues to bring their own fundamental character to the night time economy. Everything from Max Savage at the boutique Grace Emily to The Incredibles at the stalwart Arkaba.”

The information gathered for the 2015 census will provide a valuable benchmark that will be used to compare another census expected to take place in May of 2016. This will demonstrate whether any changes to liquor licensing will have an impact on the live music scene.

“I encourage Adelaide residents to have a look at the census findings and see if there’s some live music happening near you. There are bands and musicians playing around who are as good as you will find anywhere.” said Live Music Office Policy Director John Wardle. 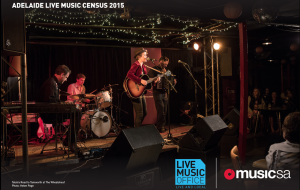 In May 2015 Music SA and the Live Music Office undertook a census of live music of licensed premises in greater Adelaide, to take a snapshot of the state of play. Compiled by local DJ Luke Penman of Radio Adelaide and Music SA, data was gathered from venue websites and social media pages, gig guides such as Rip It Up and Live at Your Local. Further information was sourced through word of mouth, working the phones as well as Music SA and industry contacts.

The State Government’s Music Development Office and the National Live Music Office provided financial assistance for the project, which was commissioned by the Music Industry Council (MIC).

Music SA champions original contemporary music in South Australia. Music SA is a not for profit organisation who have, for the last 18 years, been helping to build a thriving, sustainable and globally-acknowledged music industry in our state.

The South Australian Government has set up the Music Development Office as a collaborative union of ‘Arts’ and ‘Industry Development’, with strategies in place to support the ongoing development of the contemporary music industry in South Australia.

The Live Music Office works to increase opportunities for live music in Australia by identifying and advocating for better policy, regulation and strategy. Established by the Federal Government, in partnership with APRA AMCOS, the Live Music Office was set up to review the impact of policy frameworks on the Australian live music sector. Our scope includes planning, licensing and regulatory policies, as well as cultural, audience and market development strategies.