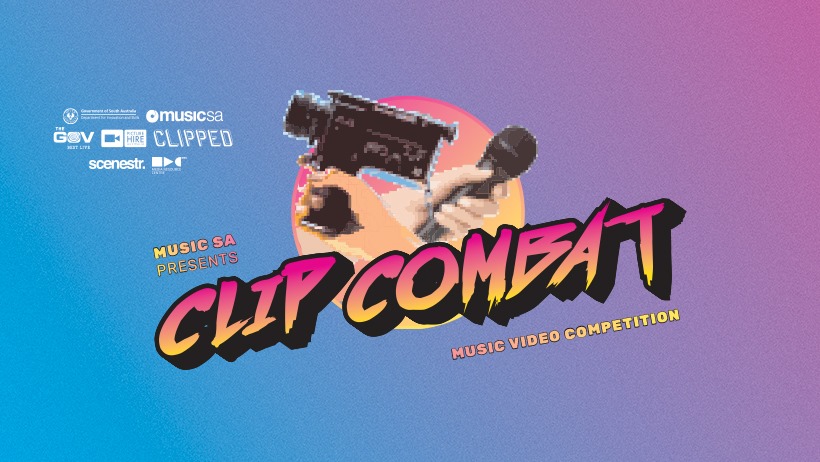 Young musicians and aspiring filmmakers who worked together to produce new music clips for original songs have been recognised in Music SA’s inaugural Clip Combat competition.

The Minister for Innovation and Skills David Pisoni said Clip Combat was inspired by the “Battle of the Bands” model, with entrants vying to win prizes to support the professional development for their craft and increase exposure of their work.

Music SA received 40 entries across the High School and Open Categories (up to 25 years) and three finalists from each category were chosen and screened Thursday night to an audience of industry VIPs and invited guests at the Mercury Cinema as part of the Umbrella Winter City Sounds official program.

“It’s great to see the level of engagement in this competition. Just to enter requires a fair bit of commitment – sourcing an original song, conceiving a concept and then the logistics of filming, editing and bringing it to life – using so many skills that will be beneficial no matter what career path entrants end up choosing,” Minister Pisoni said.

“This initiative targeted young people, as it not only provides them a platform for their creative output, it also provides them with help from Music SA which held information sessions on the Making and Marketing of Music Videos, to hear from expert music and video filmmakers.”

Music SA CEO Lisa Bishop said: “Music SA is thrilled to recognise the collaborations between filmmakers and musicians because the marriage of the two art forms is an important element of a music city. It’s been fun to highlight music videos as part of the Umbrella Festival.”

High School Award Winner Harry Kellaway said: “The process of making this music video was to say the least interesting. The approach I took in the creation of this music video was to combine all pervious knowledge and experimental piece of film I had developed in the past together into on cohesive music video. Incorporating film, animation and digital motion graphics. I feel greatly honoured and ecstatic over this award, I have a great love of filmmaking in my life. It’s my passion and dream to one day aspire to direct and write my own feature films for world to enjoy or at the most be a part of a talented feature film crew.”

The overall Clip Combat winners were chosen by 50 per cent public voting via the Scenestr publication and 50 per cent by judges’ panel voting, which looked at execution and suitability of video to song choice.

Other prizes include broadcast of their music video on Channel 44, screening at Clipped National Music Video Festival, free equipment hire by sponsors to the value of $1000, automatic entry in the MRC’s 2019 Clip It Music Video Production Initiative (High School Award only), screening for one month on the Music SA website, a double pass to Porchland Festival 2019, and more.

Clip Combat was proudly supported by the State Government through its Music Development Office (MDO).

As part of tonight’s program, guests viewed the public premiere screening of ‘City of Music’ a short documentary presented by Music SA, The City of Adelaide and the State Government’s MDO.

The documentary features the creation of the City of Music Mural which has been commissioned as part of the ‘City of Music’ project and supported through the Music Development Office with $10,000.

To watch the City of Music video visit www.cityofmusic.net.au