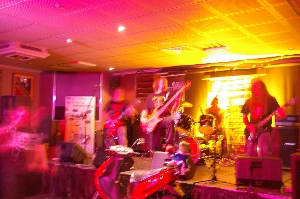 Pigsteerer was formed in 2004 by Tim Westergaard ,Adam Block and Nick Major. By 2005 the lineup was expanded to include Ben (Grub) McMorrine and Dan Hart. since then we have played the Adelaide Pub scene relentlessly to wide acclaim and great turnouts to shows. We have also released two recordings, a self titled 6 track and a full length studio album titled Trotters of Doom, which debuted onto the 3d album of the year charts at no.4!! While we take our music seriously we firmly believe music is for enjoyment and as such inject a unique blend of tough songs with an eclectic sense of humour and blatant use of our imaginations.