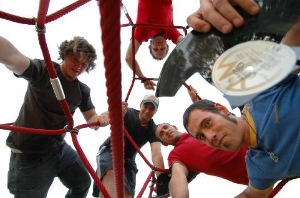 The Levitators played their first gig in November ’04 at the Rhino room as a four piece, having yet to recruit their old pal “Chops” on samples and guitar. With credentials like these, it wasn’t surprising to see such a massive crowd. When Chops hit the stage with the lads for their second Rhino show, it was clear to see this band was ready for take off!

Febuary ’05 saw their first appearance at the Crown & Sceptre, where a sold out crowd and awesome show helped the band secure a regular club night there to become known as “Catapault”. With the help of their right hand decks man DJ Ego and guests, Catapault nights have become a huge success.

In late January ’06 Chops played his last gig with the band before moving overseas. This opened the way for yet another old pal “Utility Jackson” to join the band, adding yet more texture to the bands sound with his turntable skills.

The band has no particular influences, though some aspects of the Levitators are comparable to The Propeller heads, The Prodigy, Chemical Bros, Massive attack, Asian dub foundation and even The Doors. The intense energy, tightness of the rhythm section, improvisation and mastery of dynamics helps the Levitators in creating their own, distinct sound. The music comes across more like a mix of “movements”, rather than a set of songs, creating a journey similar to a good DJ set. The energy and sense of fun that flows from the stage, together with the infectious grooves gets people really up for a party!