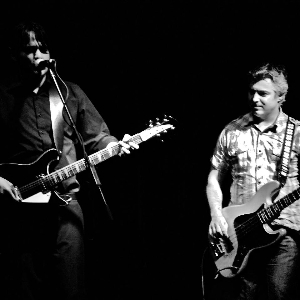 The Low-Fi Cowboys are a guitar pop, indie, shoegazer and alternative country act. They are influenced by eighties and nineties guitar bands like The Church, The Triffids, Died Pretty, The Go-Betweens, The Smiths, The Stone Roses, Echo and the Bunnymen, My Bloody Valentine, Ride and many more. The band is a part time project for singer, songwriter and guitarist Tim Hudspith and bass player James Bosworth. The Cowboys provides a means for Tim and James to get together on rare occassions to play old Colourwheel and early Goldentone songs. The Cowboys released their debut limited edition CD single ‘Low’ in July 2009 and debut 12 track album ‘Atmosphere’ in late 2012.