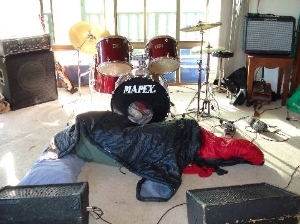 A band without peers, pylons or any wood bracing The Toss is poised and ready to implode, releasing its unrelenting mediocrity on an unsuspecting public.

The band describes their music as Surf/Sport/Rock/Paper/Scissors and was the first to label themselves as SI/FI, (Self Indulgent Frivolously Interesting).

The history of the members is long, dark and ugly and reads like a who’s who of unknowns.

The band morphed (sic) from DFPA (Deep Fried Purple Aeroplane) in which 6 of the original Toss members played in. This 3 piece band had a huge “one night hit” but failed to capitalize on the instant success.

Like so many others before them stardom took its toll.

Of the 3 members, 5 of them are now dead or should be, 2 are pregnant and 1 is up for re-election.

The remaining 2, wearing dark glasses, walked silently away from the glare of the media and recruited RoToss on drums. This was mainly due to the startling coincidence of them all having the same last name.

The name of the band was easy, The Toss, evolving from Greek word, toss, meaning “to spin a coin in the air” This summed up the spirit of the band and was in essence the beginning of the middle that will eventually lead to the end.

One name that is synonymous with the band is Frank Johnston, although none of the members know anyone called Frank and refute the claim as “Media Hype”.