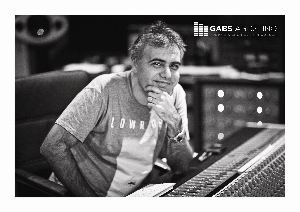 Gabriel Agostino is a freelance Sound engineer/producer based in Adelaide South Australia.

Gabs recorded and engineered Lowrider’s second album “Round the World” nominated for an ARIA in 2010 and Lowrider’s Third album “Black Stone”, recorded 2 tracks for Shaolin Afronauts 2011 ARIA nominated album “Flight of the Ancient”, Ben Todd’s album “twenty ten” which was on rotation on Qantas Jazz Channel and Lazy Eye’s “Move Me” which won South Australian Best Blues Albulm of the Year 2013.

Gabs is also an accomplished musician having played the guitar since age 7, studied at the Buenos Aires Conservatorium of music as a child for 3 years, completed a diploma of commercial music TAFE and an associate diploma in Jazz at Adelaide University in the mid to late 90’s and toured the country and played overseas with several bands.