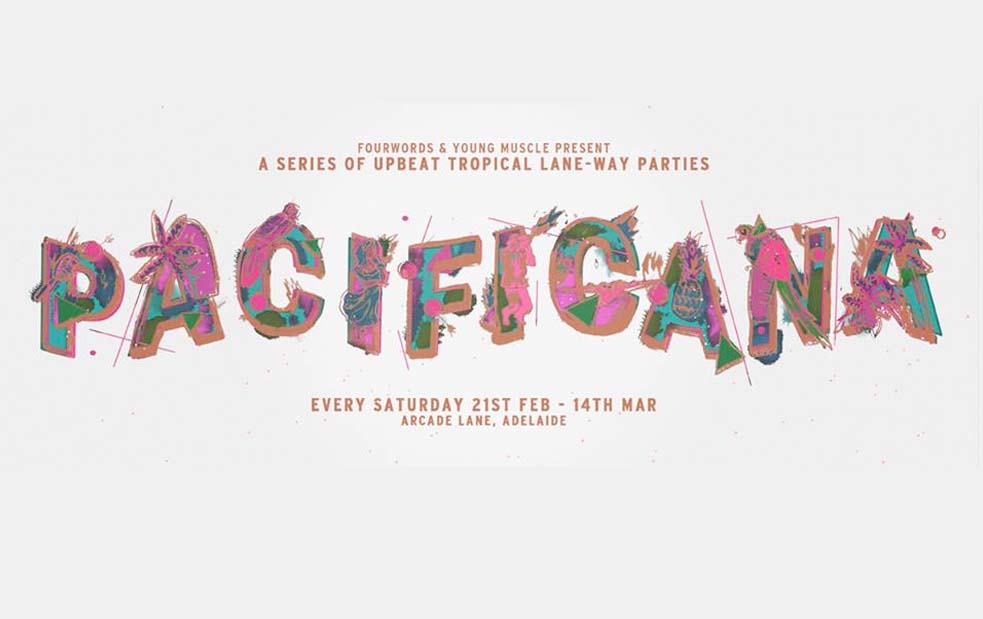 It feels like the crew from FOURWORDS have been a bit quiet lately, but they’re back at Arcade Lane again this year, collaborating with local musician collective YOUNG MUSCLE for a series of events called PACIFICANA. Promising a “Tropical Laneway Paradise”, the first show is on February 21 with FLAMINGO launching their latest EP and continues each Saturday night till March 14, seeing acts like Melbourne’s ROLAND TINGS and HARTS as well as locals SILVER SANDS and more. Full lineup and info here.

– BLENHEIM MUSIC AND CAMPING FESTIVAL has been growing steadily over the past few years, with 1700 expected to descend on the Clare Valley site this Good Friday [April 3]. The lineup’s a doozy, with international acts TONY JOE WHITE [USA], Z STAR [UK] and MARLON WILLIAMS [NZ] joining locals TIMBERWOLF, MAX SAVAGE AND THE FALSE IDOLS, SHAOLIN AFRONAUTS, URTEKK, ABBEY HOWLETT and heaps more. Tickets are on sale now. Don’t delay as it always sells out.

– The Royal Croquet Club is also back for another year, and this week announced their main stage lineup. All main stage acts are free before 7pm or $5 after and this year’s lineup includes touring artists like MR SCRUFF [UK] and DJ SHADOW [USA] as well as locals SHAOLIN AFRONAUTS, ASH GALE, THE TIMBERS and more. Full info here.

– COMA‘s Jazzflip! series sees two composers swap tunes and reinterpret them, performing the new versions live at the Wheatsheaf. The first in this year’s series sees the 18-piece funk/hip-hop big band CRUMP CAKE ORCHESTRA exchange songs with experimental/electronic duo voiceROM, in what will no doubt be one of the Jazzflip! highlights to be remembered for a long time to come. Hear the voiceROM tunes that CRUMP CAKE ORCHESTRA will be playing here, and head to the Wheaty this Monday to see it all go down.

– THE BEARDED GYPSY BAND‘s KIAH GOSSNER is working on a new project for Fringe, incorporating visual design and projection as well as live music performance. Vane Of Barbs is “a contemporary spin on Ghandi’s view of the human condition” with five shows across the Fringe season. More info here.

– Soul powerhouse JAYNE-ANNE POWER launches her latest album [thanks to a successful crowdfunding campaign] this weekend and RIP IT UP has the first taste, including a free download. Listen in here. Catch Jayne-Anne Power in the Garden Of Unearthly Delights this Sunday arvo.