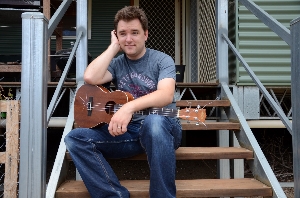 “Be the band you want to see in the pub.” That’s how the quote goes, right?

Eight years after the last of his various bands broke up, Peri Strathearn came to a realisation. Music wasn’t always something recorded in a studio, broadcast on the airwaves or even played on a stage. Music was everywhere. Including in the front room of his house.

Barney Rebel was born with a new year’s resolution: every week for a year, Peri would play something on his baritone uke, film it and post it online. Barney Rebel is a band with only one member (so far), only a handful of fans (so far) and a long way yet to go (so damn far). But fame and fortune isn’t the object. Gigging in the big smoke isn’t even the object. Music is the object, and that’s enough. These are the compromises you make when you hit 30.

So expect folk-pop you can sing along to, an eclectic mix of originals and daggy covers with a touch of the blues and a smidgin of good humour. Expect the occasional cameo – heck, volunteer yourself if you’re keen. Expect to hear a few stories in song. Just don’t expect fame and fortune. Treble troubles Barney Rebel; rabble-babble doesn’t.