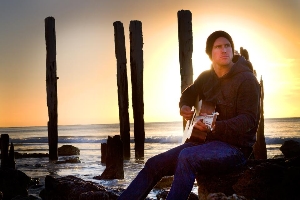 A talent that has been swept under the rug for years; local Adelaide musician Christian Andrew has found his feet and is running headfirst into the music scene. He is out to prove that all is not that meets the eye, as this tall but gentle giant delivers his unique acoustic sounds. With a few hat tips to John Butler, Newton Faulkner and Andy McKee, Andrew’s distinctive guitar style and vocals are self-taught. He expertly picks and plucks his way through a plethora of tunes, matched by his unexpectedly soft vocal tones, combining to form a rare style that is Christian Andrew.

Keeping his talent very much to himself up until 2013, he finally found the confidence to display his emotive nature to his closest friends, of which none had experienced his musical abilities. As such, it is now these friends and family who are the soul driving force behind pushing him to get his music out onto the airwaves of the nation.

His song writing reaches to the depths of his soul, crafting his lyrics from his innermost thoughts and most personal of experiences intriguing the listener even further, peeling back the layers of his persona. This emotionally charged music allows his performances to connect with and captivate audiences, creating an emotional bond with many of those who can relate to his lyrics.

Coming off the release of his debut self-title EP in December 2013, his presence about town is increasingly more apparent. Everywhere you look, Christian Andrew is emerging. He is spreading his name far and wide across the city, building momentum and growth with every performance. With a sell-out crowd attending his EP launch, and a smorgasbord of interstate performances under his belt, it is a sign that good things are just around the corner for this local artist.