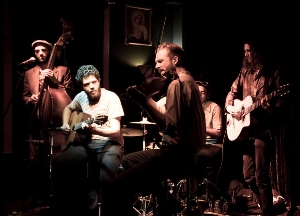 Monsieur Swing are a five piece gypsy jazz troupe from Adelaide who play a mixture of standard and original compositions heavily influenced by the French Manouche style.

Manouche players like Django Reinhardtand and Stephane Grappelli serve as a musical point of departure as the group borrow from other styles such as Classical, Jazz, Balkan and Romani music, creating a sound that has been described as ‘soulful gyspy jazz’.