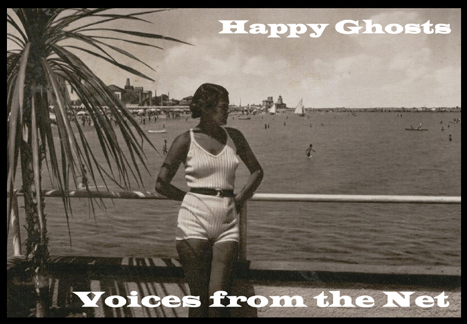 VOICES FROM THE NET – new album released May 2020.

“Voices from the Net” is unique piece of work – the album has been constructed using ‘found’ vocals and rhythmic contributions sourced through global sharing communities.

The beginnings of the Happy Ghosts was a happy accident. A meshing of a documentary, its supporting soundtrack and a stuttering 1950’s voice over, led to the birth of the band in late 2004.

Following a path that can only be described as unique, it is difficult to place the Happy Ghosts within any trend. Maybe alternative electronica one day, ambient pop the next.

Although seemingly passing under the radar of ‘popular’ music, the Happy Ghosts have received worldwide airplay of their songs and videos, chart placings on many independent radio stations, inclusions of their tracks on CD compilations and in documentaries and films, and five-star reviews of their albums and EP’s.