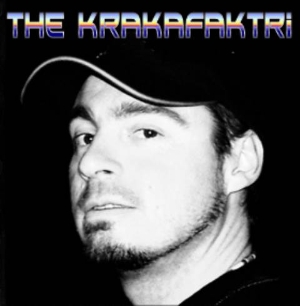 The Krakafaktri is composer/producer/(DDj Krakaman) Paul Allan from Hallett Cove in Adelaide South Australia. Since mid 2004 Paul has been forging his own brand of music from his humble but adequate home studio from influences ranging from early heavy metal up to the latest electro & drum ‘n’ bass sounds. As a musician for around 20 years and as a bassist/songwriter and founding (now ex-) member of Skintilla, he has also played guitar, drums and has sung in one form or another. Covering the genres of Drum & Bass, House, Trance, Electro, Chill out and whatever else….he has been able to produce some decent tunes and get a few on rotation on FreshFM 92.7 in Adelaide. One cheesy track in particular ‘You give me pleasure’ featuring vocalist and old school buddy ‘Vassilios’, made it on to the 2007 Central Station compilation ‘Fresh Air vol. 2′( by Adelaide’s Fresh FM 92.7’s local radio show ‘Fresh Air’ which showcases local and Australian artists every Monday night from 8pm.) Paul has worked with various vocalists including Karina Agostino, Vassilios Vasiliou, Liz Rallis, Tarsha Ross, Jennifer Liston, Sunshia Mashei & Belinda Schwerdt to name a few, and continues to scour the internet for talent regularly,as well as performing his own vocals on certain tracks. So if you wanna get your groove on…..hit me up!