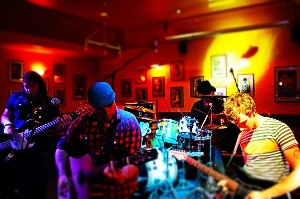 Award winning, internationally recognised superstar group The Monikers are in Adelaide to paint the town indie-go!
But not really, the Adelaide based indie-rock band The Monikers formed in the early months of 2013. Since then, the band which consists of 4 uniquely talented musicians have created their own sound which delivers a mix of sweet acoustic sounds, overlaid with catchy melodies and hooky riffs.
Previously having played several successful local shows at venues such as The Ed Castle, The Gov and The Crown and Anchor, The Monikers continue to please crowds with their catchy and memorable sets.
In mid 2013, The Monikers released their first EP “Mine”, with plans to release their first album in 2014.
With their distinct sound and ever growing catalogue of songs, The Monikers have their sights set on world domination! Or just to share their love of music with everyone!