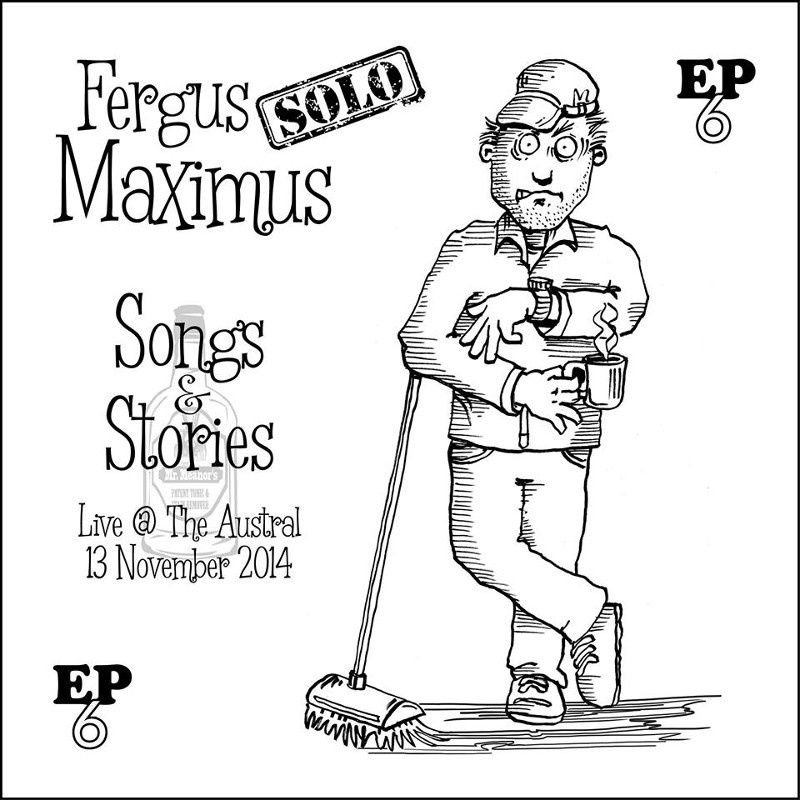 On the 6 song EP ‘Songs And Stories’ Fergus Maximus has delivered a set that can probably best be described as charming. Recorded live at the Austral it is a raw and honest account of his song-writing. It also includes between-song banter which provides context for each song – hence the title ‘Songs And Stories’.

In both song and spoken word Fergus comes across as a nice guy, a little intense and maybe a little too prone to the odd “dad joke”. He sings with an earnest clarity, most evident in the last track ‘Fish’. He reminds me of Things Of Stone And Wood or The Whitlams.

One voice and one guitar, Fergus accurately describes the playing as “adequate”, this record relies on the song writing to carry the listener. The songs are fairly uncomplicated observational narratives, full of self-deprecation – he muses on the mundane; life in the rat-race, always running late, going back to the scenes of past heartbreak, a missing housemate and busking.

Fergus knows how to structure a song. The strummed rhythms and chord patterns are interesting enough to make me wonder what they would sound like with more instrumentation. He even sings a few instrumental hook-lines that would translate well to guitar, keys or horns.

It is evident from some of his anecdotes that Fergus has been writing for a long time and has taken part in a number of workshops to improve his craft. It seems to me that the biggest issue for Fergus is not the song writing but the intended audience. If he was funnier his playing and delivery would really suit stand-up comedy; if he was a bit less self effacing and earnest he could be a compelling folky; it wouldn’t be an enormous leap for him to write songs for kids, the songs already have the requisite amount of naivety.

I enjoyed listening to this record, it really felt like attending a gig. The stories are an important and essential part of the experience. There is a twelve track LP version which I would suggest is a bit too long (it includes 30 seconds of him tuning his guitar!)

It says in the bio that this recording was made at his first solo gig (thumbs up to Noni Espinosa’s work a sound engineer on this) – I would suggest next time maybe waiting until the songs and stories in this show are a little more road tested before pressing record.