For a building that started out in 1905 as a flour factory, Fowler’s Live has come a long way as one of Adelaide’s classic live music venues.

Taking its name from D and J Fowler’s early enterprise, the venue also has a history as a home for the Fringe Festival itself back in the ’70s, which also made use of the adjacent vacant warehouses on the current site of Uni SA. In 2000 its Level 1 office space became the ill-fated ‘Music House’, and over time it has also housed the headquarters for SALA Festival, Leigh Warren Dancers and even Music SA (up until 2014).

Events manager extraordinaire, Peter Darwin of Flashpoint Events was in fact the 1st paying tenant, and eventually transformed the former ‘Lion Theatre & Bar’ space into today’s Fowler’s Live, which opened over 10 years ago on 4th July 2003.

It continues to host a range of genres, but is best known for the rock / hardcore / metal scenes. Above all, the basic policy is that it should be original live music – no covers, no 18th birthday parties etc. Fowler’s Live is also one of the few venues that tries to have as many licensed, all ages shows as possible. 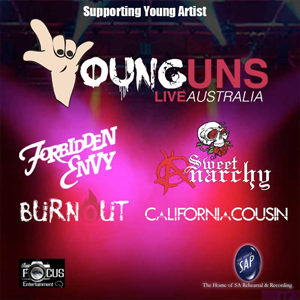 Following in that vein, during Adelaide Fringe 2016, it will feature a one-night-only show “Young Guns Live Australia”, with some of the acts averaging in age from 13 years old!

It will be the start of the musical journey for these original, young bands ranging from punk rock, new country and even mainstream pop. Click on the names to view some footage of rock act Forbidden Envy, who have an average age of 16, Burn Out are mainly 13 year old punks, California Cousin are generally 21, and Sweet Anarchy average 15 years old. Get in on the ground floor and support the future of our music scene.