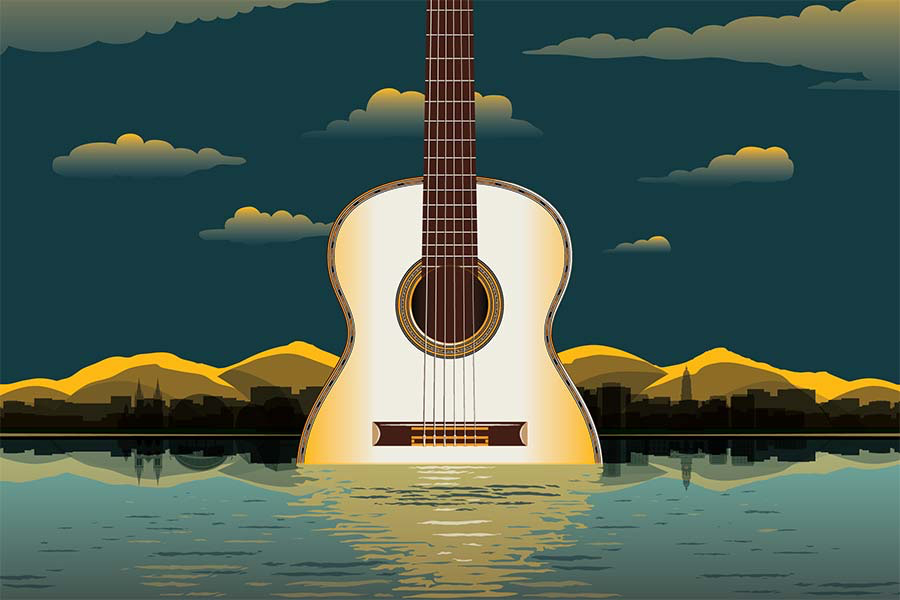 Listen up guitar lovers of Adelaide!

Guitar in Bars is taking the Adelaide Guitar Festival to the pubs and clubs of South Australia – bringing these venues alive with the magnetic sounds of the world’s favourite instrument. Rock, jazz, blues, folk and more – there are no limits  – just a  burning desire to play and hear incredible guitar.

The program will feature the best of Adelaide and South Australia’s live music venues and artists. Venues can sign up, free of charge, to host at least one guitar-based live music event. Guitars in Bars will run from 15 July – 10 August.

The venues will then be included in the 2016 Adelaide Guitar Festival brochure, including “Guitars in Bars” venue signage and marketing support to spread the word about this great guitar initiative.

As an added incentive, one local artist will be selected by Adelaide Guitar Festival artistic director Slava Grigoryan to play as the opening act for one of the Festival’s headlining artists.

The Guitars in Bars concept will be extended to see artists play in other places such as galleries, wineries and public spaces.

Grigoryan says the idea for Guitars in Bars came from a desire to include South Australia’s great guitar players, live-music lovers and venues in this world-class Festival.

“We are so excited to launch Guitars in Bars and we are putting the call out to the musicians and venues to sign up and get on board,” he says.

“There are so many great players, bands and venues in Adelaide and Guitars in Bars is our way of getting the Adelaide Guitar Festival out into all those places and involving more artists, more great local music in our Festival.

“It’s stretching us well beyond what we’ve done with the Festival in the past. The diversity of live music in Adelaide and surrounds is totally invigorating and we want to celebrate it.”

Adelaide Festival Centre CEO and Artistic Director Douglas Gautier agrees that Guitars in Bars is a great concept that further strengthens the Adelaide Guitar Festival’s reach and reputation and contributes to Adelaide’s standing as a UNESCO City of Music.

“This is a great opportunity for the artists and venues of South Australia to be included in this program, alongside some of the world’s most gifted guitarist.

“It’s initiatives like Guitars in Bars and the many others musical events that Adelaide audiences have the pleasure of experiencing that resulted in our recent UNESCO accreditation as a City of Culture for Music.

“Adelaide Festival Centre collaborated closely with the State Government and Adelaide City Council on this bid, which was awarded by UNESCO’s Creative Cities Network in December 2015. It’s recognition of Adelaide’s strong music heritage, our international standing and the fact that our city is committed to investing in creativity as a driver for development and cultural vibrancy.”

An Umbrella information session for musicians and venues will be held at St Paul’s 200 Pulteney Street at 10am on Wednesday March 9. Guitars in Bars will be one of the sessions covered.

The Adelaide Guitar Festival, a biennial event, is the most significant festival of its kind held in the Southern Hemisphere, bringing masterful artists from around the world together with some of the best Australian musicians to deliver an eclectic and entertaining program of events. The festival is made up of performances, free and low cost workshops, master classes, artist talks, panel discussions and programs for emerging musicians.

The full 2016 Adelaide Guitar Festival program will be released in April. The Festival runs from 11 – 14 August.

To register for Guitars in Bars go to www.adelaideguitarfestival.com.au.