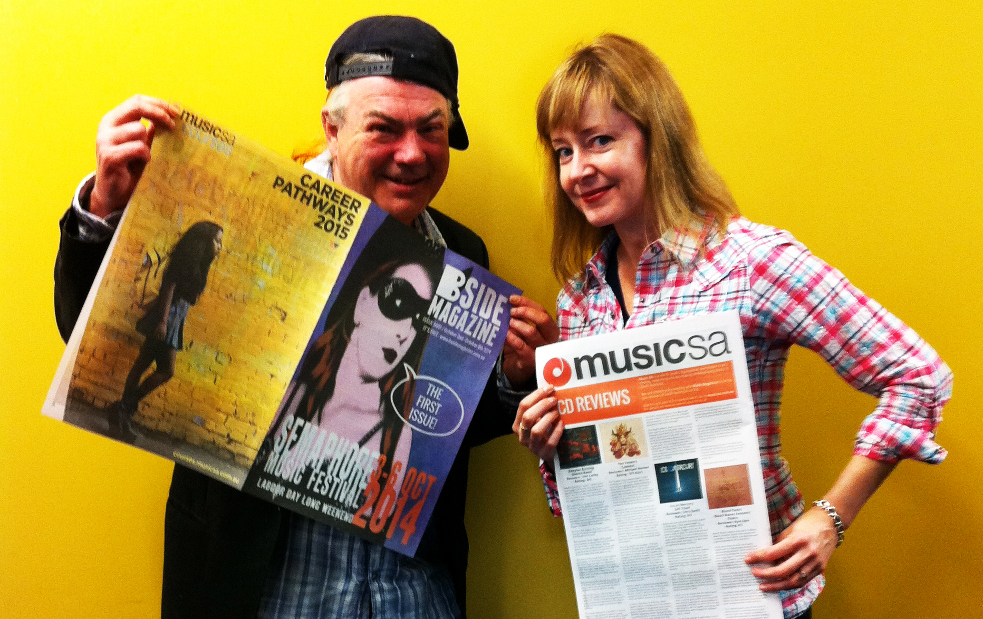 – First of all, a big HAPPY BIRTHDAY to ROBERT DUNSTAN, one of the most passionate and longest-serving champions of the local music scene [not to mention the man behind BSide Magazine, as soon above with our Digital Marketing Manager, Dr Elizabeth Reid.] Bob turns 60 this week. Happy birthday Bob, here’s to many more!

– The Clipsal 500 happens this week, meaning the after-race concerts which feature Bands On Track artists are happening this week as well. If you’re heading there, be sure to catch URTEKK and KOOLTA on the Friday night, JAC DALTON WITH SONIC DIVIDE and LAZY EYE on the Saturday night, and GRENADIERS and HORROR MY FRIENDon Sunday night. Full info here.

– Speaking of KOOLTA, his second album, Revolutions Per Minute, comes out on March 25. Pre-orders are available now from his Bandcamp page.

– In other new releases, BATTLEHOUNDS have teamed up with local MIRADOR RECORDS to release their latest on March 6.

– You don’t have to wait for new stuff from ECHO & THE EMPRESS though, their new tune The Gun is available now.

– The constant stream of good news from TKAY MAIDZA continues, as she’s just won the 2015 Tolling Stone Award for Best New Artist, and announced a national tour. She’ll be playing Adelaide on April 11.

– BACKWATER music/arts/DIY culture shop officially opens on March 13, but before then they’re inviting interesting artists an opportunity to view the space and find out more about how to get their stuff stocked. They’re running two sessions, across February 28 and March 7. More info here.

– Post-hardcore band SEALED OUR FATE has decided their guitarist just has too many guitars and are going to start giving some away. Keep an eye on their Facebook page if you’re in the market for one.

– At the start of the year, SIERRA announced their final shows. They’re happening this weekend, with a hometown show in Mt Gambier on February 27 and a Melbourne show on the 28th. Info here.

– ROSS MCHENRY will be visiting Flinders University on Friday February 27 to deliver a TED talk on global creative communities and the end of isolation. More info here.