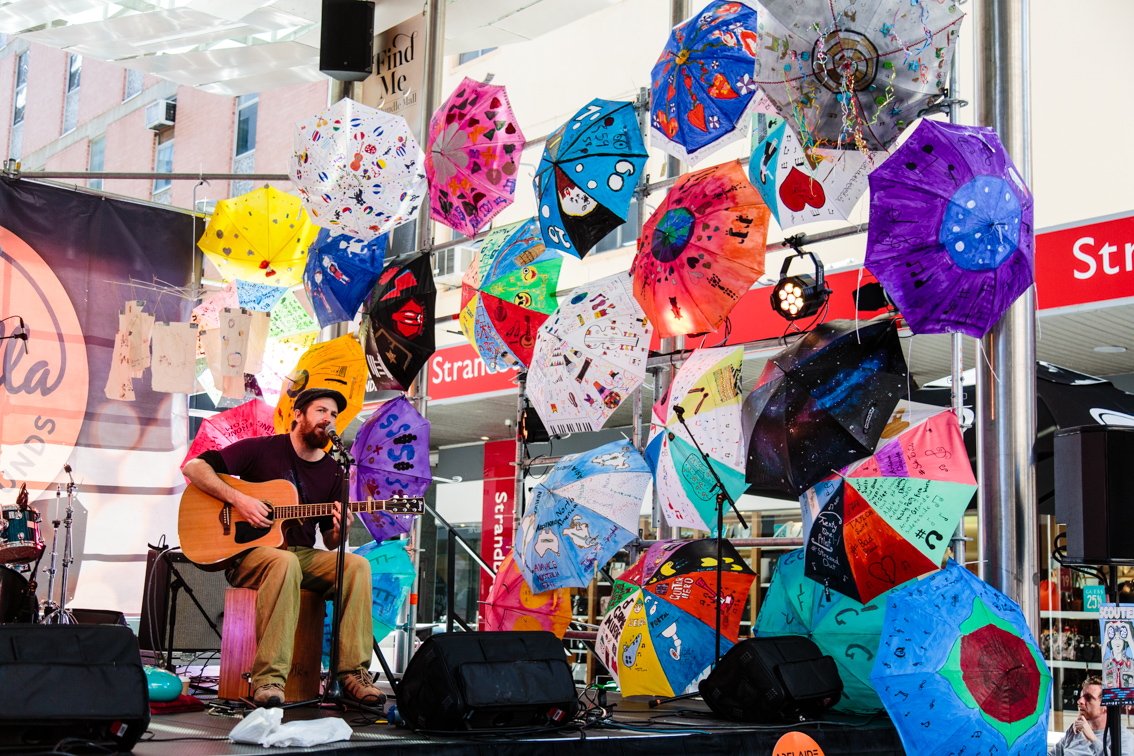 Music SA is proud to announce the return of the popular Umbrella: Winter City Sounds festival for its fourth year, delivering a program of live music across a range of Adelaide venues this July and including a host of awesome showcase events.

Featuring over 20 different contemporary genres, and with performances at a list of venues covering almost the entire state, this year’s Umbrella Festival is pouring with possibilities.

The two-week festival runs from 12to 28 July, including a combination of open-access and curated performances, treating Adelaide audiences to gigs from some of the hottest local and national acts in contemporary music. With online registration still open, the 2019 printed program includes 250 events across 111 venues, representing a 63% increase on last year’s number.

Once more, the support of the City of Adelaide has ensured a vibrant program of city-based, curated events. Headlined by Triple J rock mainstays Kingswood and supported by the best of the Adelaide live scene, Cry Baby Fest is a free street festival that is sure to be a highlight. Down by the River will take place at Tandanya, with a focus on Aboriginal narratives in music. Meanwhile, the recently launched Girls Rock Adelaide will present a showcase event from their inaugural SA camp.

The Mercury Cinema will play host to live music and a big screen premiere of the documentary City of Music which maps the creation of the biggest mural in the City of Adelaide dedicated to music. Alleyway Acoustica will offer local music, wine, food and fairy lights along Lindes Lane on a Wednesday evening for those leaving work, Lunar Boogie is a space-themed pop-up party in MOD’s lecture gallery highlighting underground dance music from the past to the present, and hip hop show at The Jade, A Lyric for your Thought will raise funds and awareness for Headspace.

The 2019 program also boasts a number of exciting new innovations, such as Umbrella Place, an eye-catching installation of colourful umbrellas above Vaughan Place (inspired by the Agitagueda art festival in Portugal), and The Producer Series in Rundle Mall, placing  a “musician’s bedroom” inside a perspex box, to allow passers-by to observe local synth sensation Luke Million as he produces original tracks, like many musicians do in their home studios.

On top of the incredible acts, there will be activations and pop up performances in the railway station, kids shows, art installations and plenty more.

While 2018 saw Umbrella move into the suburbs, this year marks the festival’s expansion into regional and rural areas with the winter music shared all through the state, including events in Port Lincoln, Berri, Mannum, Clare, Mount Gambier/Mount Schank, Victor Harbor, Ceduna and Port Augusta.

Festivities kick off on Friday 12 July with a family friendly, grand Opening Night Party at the newly developed Topham Mall in Adelaide’s West End, featuring legendary musician Archie Roach. Partnering with businesses in the area, the free street party will showcase bands from near and far. At the other end of the program, Umbrella will draw to a close with Neon Dreams, a closing night party hosted in the East End at the Crown and Anchor, Chateau Apollo, Roxie’s and Midnight Spaghetti.

Scouted will also be a returning feature of Umbrella, with Music SA presenting the best of Adelaide’s unsigned contemporary music acts across four stages in Adelaide’s East End in front of national industry representatives and the public on the evening of Friday July 26.

Premier Steven Marshall says he’s always pleased to see the growth of festivals showcasing local talent, which put South Australia on the map as a hub for the arts.

“Umbrella Winter City Sounds provides the perfect opportunity for the public to see some of the best local artists South Australia has to offer, and I encourage everyone to get out and see just how strong our music scene is,” he says.

Minister for Innovation and Skills David Pisoni says the State Government had provided an additional $50,000 to Music SA and Adelaide Festival Centre to increase Aboriginal engagement and performance opportunities during this year’s festival.

“This has made for an enhanced program branching out into our regions, with a live music event in Port Augusta to be delivered by the Adelaide Festival Centre partnering with Umeewarra Community Radio Station,” Minister Pisoni says. “Other elements include the Umbrella Opening Night Street Party coinciding with NAIDOC week – which will feature headliner and national music legend Archie Roach, and a Kaurna ceremony and performances.”

City of Adelaide Lord Mayor Sandy Verschoorencourages people to enjoy as much of this year’s program as they can.

“Umbrella Winter City Sounds is a fantastic opportunity to discover some great South Australian music and enjoy our city’s wonderful musicians and live music venues during winter,” she says.

“As a UNESCO City of Music, Adelaide is recognised worldwide for its vibrant music culture and its support for the music industry, with a long-standing and growing reputation as a city that supports live music.”

Music SA CEO Lisa Bishop is thrilled to see Umbrella return for a fourth time to get people out and about to experience the rich live music scene SA has to offer.

“This program is so important to contemporary musicians in South Australia. It is an opportunity for artists at all stages of their career to perform as part of a significant festival, while audiences can experience the talent that warrants our status as a UNESCO City of Music,” she says.

Online event registrations for Umbrella remain open until July 11 and can be completed here. Meanwhile, check out the full program at the website here.

Music SA is a not-for-profit organisation committed to promoting, supporting and developing contemporary music in South Australia. Nurturing careers in the industry and delivering cultural and economic benefits to artists, residents, businesses, visitors and global audiences, Music SA’s wide engagement includes artists, venues and music businesses. Umbrella: Winter City Sounds is a vibrant celebration of live music in Adelaide during the winter weeks, adding to the rich tapestry of Adelaide culture and upholding our status as a UNESCO City of Music.