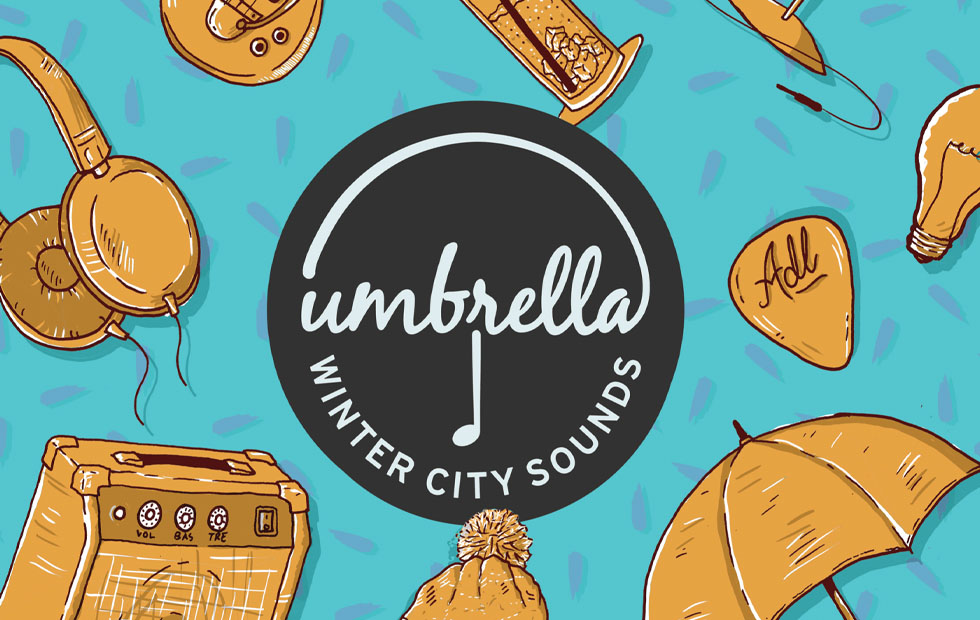 Music SA today announced a program of over 300 live music events across more than 100 different venues and locations throughout the Adelaide, for the 2017 Umbrella: Winter City Sounds from Friday, July 14 to Monday, July 30.

Umbrella Winter City Sounds, a two week festival partially curated partially open-access, will transform Adelaide into a winter wonderland of music and discovery as the CBD and outer-city suburbs come alive with the warmth of music echoing throughout bars, trams, car parks, the Mall and abandoned hospital wards.

Set to engulf Adelaide’s renowned live music venues, along with the more unusual live performance spaces; Umbrella today unveiled a diverse program of musical events that ranged from the moving musical masterpiece The Tram Sessions – a collection of joyful musical tram takeovers from some of Adelaide top original musicians, to the exciting family friendly Aqua Beats in Victoria Square, and a Winter Island Festival of world music. South Australia’s own Golden Era Records will team up with Bad Apples Records for the AIR after party, there will be a late night of Club Rap at the Fat Controller, and a diverse selection of tribute band offerings.

Glenside’s Z-Ward for the criminally insane will again be a focal point of Umbrella, as the audio visual extravaganza Dark Matter turns the abandoned hospital into a deluge of sensory overload, and the acclaimed psychedelic rock event, WINTERSTEADY returns for its second installment as it expands its capacity across the Crown and Anchor Hotel, The Exeter Hotel and The Austral Hotel for a three stage rock bombardment.

Following on from the runaway success of the event’s inaugural hosting in 2016, which saw over 260 live music events held across the Adelaide CBD delivering entertainment for approximately 40,000 seasoned and new music fans, Umbrella has been again made possible with support from the State Government’s Live Music Events Fund for the coming three years.

South Australian Arts Minister Jack Snelling has thrown his support behind the winter music festival as Adelaide continues growing its reputation as a leading global UNESCO City of Music:

“Adelaide has a rich tradition of showcasing the arts, and Umbrella: Winter City Sounds is testament to what a city can do for musicians, audiences, visitors and venues when we collectively get behind live music,” Mr Snelling says.

Lisa Bishop, General Manager of Music SA – the state’s not-for-profit company championing South Australian contemporary music – is excited to again transform the city into a musical melting pot throughout the cooler winter period, as the event continues to develop the states musical prominence on a national level and support venues during a typically slow time.

“Umbrella is now a staple on the South Australian events calendar, and is leading Adelaide’s Newest Festival Month with Guitars in Bars, Beer & BBQ Festival, Winter Reds, the AIR Awards, as well as the Riverbank activation.” Said Ms. Bishop.

“Umbrella Winter City Sounds is truly an exciting range of musical offerings, with something for everyone from jazz and hip hop, to psychedelic-rock and family friendly entertainment. Coupled with the major addition of being able to showcase Adelaide’s talents to key national industry identities through the inclusion of the AIR Award and conference, it’s going to be a truly exciting winter for Music in South Australia.”

The annual Australian Independent Record Labels Association (AIR) Awards attract many high profile industry leaders, while the two-day music industry conference will include an international guest speaker alongside successful Australian Independent musicians and businesses. During the awards and conference six city venues will be activated as official after parties for the AIR Awards, with a number of events including Umbrella performers plus the hosting of the Music SA flagship AIR event, Scouted which will showcase 15 South Australia artists across five stages in Adelaide East End.

Further adding to the festival environment throughout July is the return of Guitars In Bars. Presented by the Adelaide Guitar Festival, Guitars In Bars is taking to the pubs, clubs, bars, restaurants and exhibition spaces across South Australia with a series of free and ticketed gigs. Guitars in Bars is a big shout out to music loving South Australians who get out and support fantastic live music in venues around the state as part of Umbrella: Winter City Sounds.

Tickets for all shows are now on sale here>