Week One of Australian Music Month 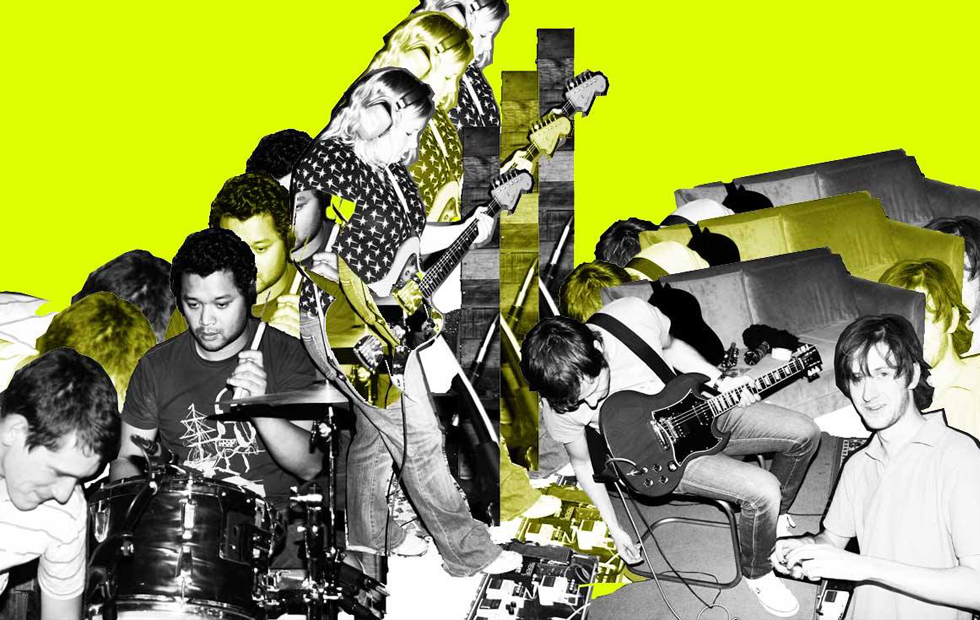 This week marks the first week of Australian Music Month and to celebrate we launched the new Music SA gig guide on November 1st (Day 1). We’ve been chomping at the bit to announce this new partnership with theMusic.com.au… so go ahead and check it out on our gigs page for all the upcoming gigs around Adelaide.

Music SA Head of Training Matthew Hayward gives us his take on No Through Road.

“No Through Road weren’t the trendiest of bands Adelaide had to offer in the early to late 2000’s – but boy they were fun to watch. Conceived as a forlorn solo project by introvert and eventual late bloomer Matt Banham, the band played many early gigs supporting Pitchfork lauded groups such as Ben Kweller, The New Pornographers and Death Cab for Cutie. Over time the band became a fully fledged Strokes inspired tour de force, touring Australia supporting their most notable albums ‘Too Much or Not Enough’ (released on Unstable Ape Records) and ‘Winner’ (Low Transit Industries) catapulting them into a brief national indie consciousness.

Commercial notoriety and growing appeal came as strange bedfellows to the band. Eventually time, distance and mostly old age led to the band dissolving in early 2009. Members of No Through Road can still be found in the SAM Award nominee Summer Flake and locals Blood Plastic, as well as Banham’s laconic solo work and online improvisational comedy.”

Elise from SA band Life in Letters talks to us about The Hot Lies!

“The Hot Lies quickly became an alt rock institution in Adelaide after forming in early 2004 as a new powerhouse collaboration between with 3 former The Killchoir Project members, plus a member each from both prolific local hardcore outfits I KILLED THE PROM QUEEN and Day of Contempt. They acutely tapped into the musical zeitgeist of the time, blending punk genres and truth be told bringing out my inner emo.

The Hot Lies were one of the first local bands I experienced a profound affinity with after seeing them play countless shows supporting touring bands at good old salt of the earth venues like Enigma and Fowlers Live. Lead singer Pete Wood would often scale up light rigging or speaker towers next to the stage and scream into the microphone, forever raising the bar in my mind of what to expect from a powerful live performance.

Their original home-recorded demo, Bulletholes and Blacklines was released 2 months after forming in March 2004, and instantly catapulted them into the national music consciousness with high rotation on Triple J. Follow up EPs Streets Become Hallways (Aug 2004) and Heart Attacks and Callous Acts (Sept 2005) enjoyed solid chart success and included anthemic singles like Promise Me and Tell Me Goodnight.

A few years later after tirelessly touring with the likes of Alexisionfire, After the Fall, Yellowcard and Good Charlotte just to name a few, the band launched their debut album Ringing in the Sane which spawned radio hit Emergency Emergency. They even received the call up to perform on national TV show Rove Live when that was a thing. It was a sad day for the Adelaide live music scene when the band called it quits in early 2010 for reasons unknown to me and my many black band t-shirts.”

Music SA’s Project Officer and bass player from The Dunes (also booker at Going Steady Music) Adam Vanderwerf gives us his experience growing up listening to The Mark of Cain.

As a gangly kid just out of high school, eager to see as much live music as possible, I first stumbled across The Mark Of Cain at Flinders Uni Tavern, or was it The Tivoli, or was it Mad Love bar? Wherever it was, the band were something of a force in a live setting. 1995 saw them release their most-popular album ‘Ill At Ease’ which was produced and financed by Henry Rollins. The album was one of the best things that I had heard. Fronted by John Scott on guitar and vocals, brother Kim Scott on Bass, and (at the time) Aaron Hewson on drums (to later be replaced with John Stanier from Helmet/Battles/Tomahawk), the music floated between hard rock, metal and punk. For me it was always about (and still is) the rhythm section keeping the pace going in this hypnotic sway, it almost lurched along as the brash guitars and monotonous vocals provided a focal point in the music. Adelaide live music scene at that time was a completely different beast… you could see bands like Exploding White Mice, Blood Sucking Freaks, Where’s The Pope?, Fear And Loathing, Iron Sheiks,  and Reckoning around town (there were so many more, but it’s all a hazy memory for me!), all packing out venues week in, week out. I collected all the tapes and CDs that I could, taking it all in, and towards the end of ’97 I moved to the US for a few years. Working in a live music venue over there, any time someone would listen I would sprout my love for Adelaide bands, make them mix tapes, sharing whatever I could to show what was happening over here.

Over the years my musical tastes have changed but those gigs by The Mark Of Cain will always be up there with some of the most unpredictable, exhilarating, exciting gigs I’ve seen.

Stay tuned for next weeks topic around women behind the scenes of the music industry.