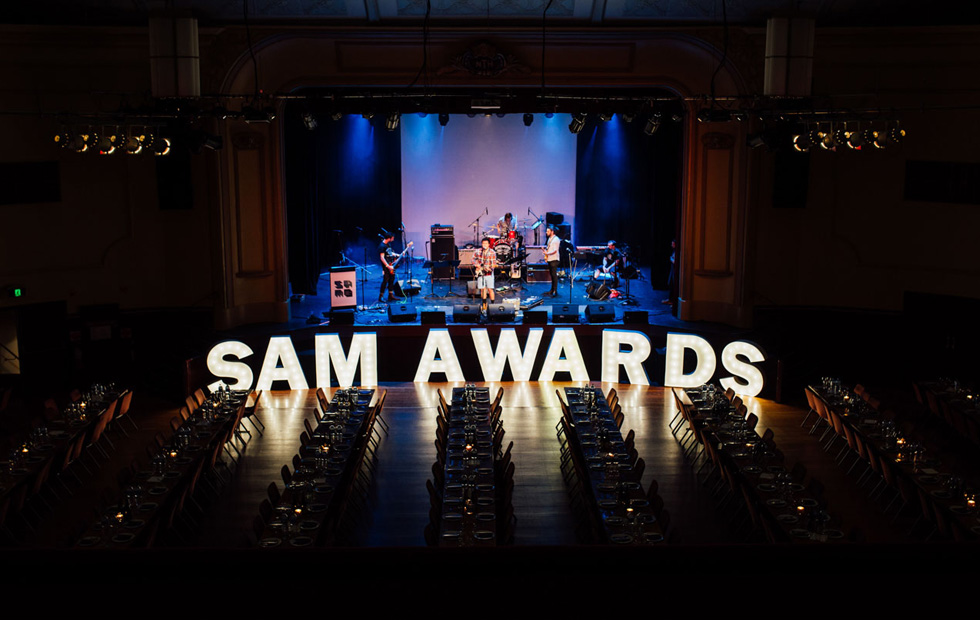 The night was an incredible success for Music SA, says General Manager Lisa Bishop, “We could not be more proud to recognise and celebrate the wealth of talent we have in South Australia. Every year we see the talent develop, and more and more South Australian artists contend on the international stage.”

MOST POPULAR HEAVY ARTIST: STABBITHA AND THE KNIFEY WIFEYS

Bad//Dreems, A.B. Original, Tkay Maizda and MANE have walked away as the big winners at the 2016 South Australian Music (SAM) Awards in what was a highly successful evening to celebrate the state’s brightest original contemporary musicians.

Self-proclaimed outsider rockers Bad//Dreems received the coveted awards for Best Release for their debut album Dogs at Bay and Best Group, and then wowed the 500 strong crowd with a lively performance of their new single ‘Mob Rule’.

Newcomer MANE was awarded Best Female Artist and Most Popular Pop Artist in the public-voted category, while Tkay Maidza, one of Australia’s most exciting music exports, went home with Best Song for ‘Ghost’ and Best International Collaboration for ‘Do It Right’ with French producer Martin Solveig. Tkay has had a huge year having only just released her debut album and scoring a nomination for BET’s ‘Viewer’s Choice Best New International Act’ award.

The uncompromising and outspoken A.B. Original – made up of the highly acclaimed rapper/producer Trials (Funkoars) and rapper Briggs went home with the awards for Best New Artist and Best Aboriginal or Torres Strait Islander Artist. Their highly anticipated debut album Reclaim Australia is due for release on November 25 through The Hilltop Hoods’ label Golden Era and Brigg’s own label Bad Apples.

Created by his family in honour of Ryan Freeman, a live music fan who passed away in 2009, The Ryan Freeman Live Music Award, was awarded to the industrious folk troubadour Kaurna Cronin who also received $4000 to assist his career.

The Lifetime Achievement Award is a way for Music SA to acknowledge someone in South Australia who has had an established history of distinguished service to the local music industry said Anne Wiberg, Chair of Music SA:

“We wanted to identify and celebrate a person who has exhibited leadership and inspiration to others and were thrilled to give the award to Gary Burrows who has been working at APRA AMCOS for over 30 years. On top of this, he continues his life-long passion of mentoring artists, writing original music and performing.”