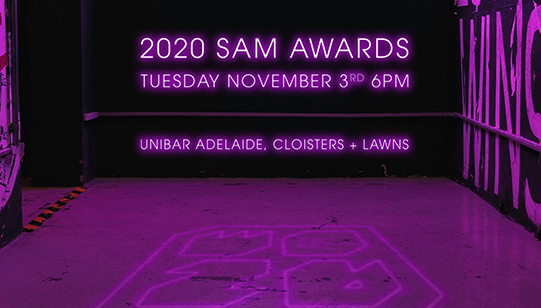 It has been an epic night of music and celebration of South Australia’s music community and industry, as the 2020 South Australian Music (SAM) Awards took place on the grounds of UniBar Adelaide’s College Green.

Across 29 Industry Voted and People’s Choice Award categories, the event saw some of the State’s best songwriters, performers and industry personnel walk away with trophies including multiple award winners Motez and Wing Defence, as well as other local legends like Ollie English, Naomi Keyte, Towns and Siberian Tiger.

Minister for Innovation and Skills David Pisoni said congratulations to all the finalists and winners of the 2020 South Australian Music Awards on their achievements and success.

“The SAM Awards are a wonderful opportunity to recognise and celebrate South Australia’s talented performers, songwriters and our local music industry which makes an enormous contribution to our economy and wellbeing,”Minister Pisoni said.

As one of the first major scale awards ceremonies of its kind to be able to be rolled out at its full capacity, in its full format, anywhere around the country this year, the organisers of the 2020 SAM Awards have noted the all-in effort made by production crews and staff who allowed the event to go off with a bang.

“It was so wonderful to be able to gather for the SAM Awards.  It was a beautiful night and the perfect way to celebrate the depth and breadth of talent here in SA, especially after such a tough time for the industry.  Congratulations to all of the winners and nominees and to the team of great people that worked hard to make this event possible.”
Kim Roberts, Music SA General Manager

FOLK – Presented by The Wheatsheaf Hotel

HIP HOP – Presented by The Gov